Conference: China and the Vatican.The Promise of a new agreement 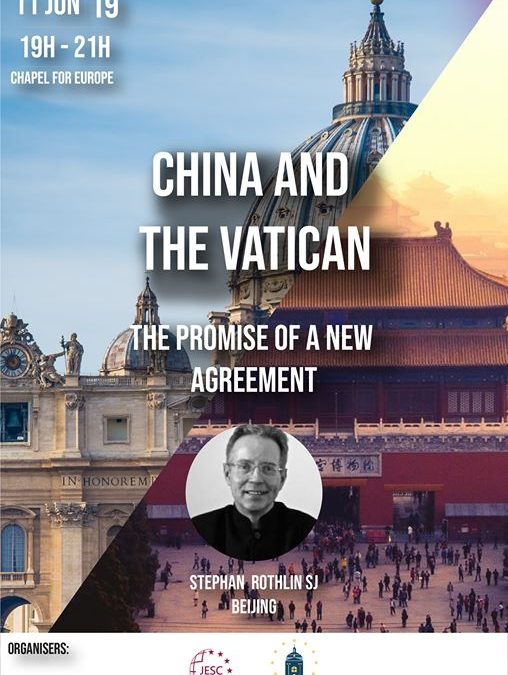 Organized by Jesuit European Social Centre:
http://jesc.eu/
Background:
In September 2018 Pope Francis signed off on a historic “provisional agreement” with the People’s Republic of China over the appointment of bishops in China. The accord broke a nearly 70-year impasse between Beijing and the Vatican. Its exact content is kept secret. The agreement was hailed in some quarters as an important step toward rapprochement and denounced in others as a betrayal. In order to understand better why this agreement has incited such strong opinions, Stephan Rothlin will give some needed historical background and then outline some hopes, risks and unanswered questions about the current state of Sino-Vatican relations.
Speaker:
Dr. Stephan Rothlin SJ, born in 1959 in Zürich, Switzerland. Throughout his professional life, he has been a transformative force in the field of ethical thought and its application. His approach to ethics is holistic and collaborative, always aiming to synergize our world’s cultural and wisdom traditions to discover common principles to work from. In particular, Dr. Rothlin’s academic and professional contributions to the area of international business ethics has been especially efficacious, raising awareness about the power and influence of business in a globalized world and how through it we can bring about a truly common good. Dr. Rothlin acquired two Bachelor of Arts (B.A.) degrees, in Philosophy, Theology and Ethics, from universities in Italy, Germany and France. He completed his academic studies in 1991 with a PhD in Economics and Philosophy and is fluent in six languages, including Chinese, English, German, Italian, French, and Spanish. From 1992 –1998, he was the Executive Director of the Academic Center (AKI inZürich) and research fellow at the Institute of Empirical Research in Economics of the University of Zürich in Switzerland. From 1998 -2012, he served as guest professor of The Beijing Center for Chinese Studies in Beijing. Since his relocation to Beijing in 1998, he has become a sought-after guest lecturer in international business ethics, having taught at various universities throughout Asia, including Renmin University, Peking University, Tsinghua University, the Central Party School of the Central Committee of CPC and the INSEAD Business School. From 2005 –2013, he was the Secretary General of the Centre for International Business Ethics, Beijing, and Chairman of the Association of International Business Ethics in Hong Kong. He serves as the CEO and Founder of Rothlin International Management Corporate Social Responsibility Consulting in Beijing. (www.rothlin.org) In 2015 he was appointed as Director of the Macau Ricci Institute (www.riccimac.org).