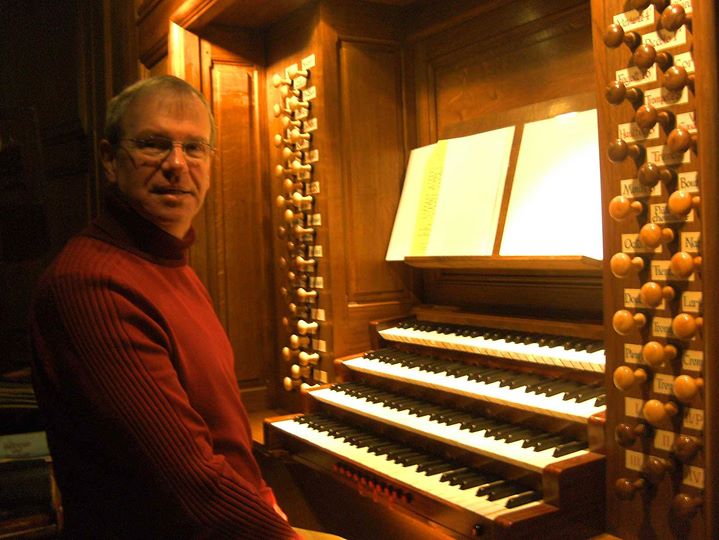 At the Lemmens-Institute (Leuven, Belgium) Erwin Van Bogaert obtained a Master degree in Organ music, and in Maastricht (Holland) he obtained a degree for music-education and for soloist in Organ music.
He continued his studies under Ton Koopman and Ewald Kooiman, and took private lessons with Daniel Roth (Paris). He also took a course with Jean Boyer in Bordeaux and returns there regularly for courses of interpretation.
He studied harpsichord and got his Bachelor’s Degree in 1990 at the Academy of music in Ghent. Since then he has acquired further skills with Marcelo Bussi (Amsterdam).
For 26 years Erwin Van Bogaert was titular organist of the Church of Our Lady in Sint-Niklaas, and was until 2011 appointed at the deanery church of St.-Martin in Beveren. He was organ teacher at different Colleges of Music in Flanders. At the moment he works freelance. His large musical interest is displayed in several ensembles, they are mentioned at his website.
For the last few years he gave many concerts in Belgium and abroad. Especially in France he is a regular guest at different Organ Festivals.
He has made several recordings at interesting organs. We refer also to his website to listen to some fragments.
On May 25th 2003, in the organ cycle at Kortrijk (B) he created “Inzicht in zich(t)” composed by Bernard Baert. For this creation he obtained the public award.
Again in Kortrijk, but then in 2007, he obtained the award of the jury for interpreting a piece by Buxtehude, composer of the year. In 2011 he obtained the prize of the audience for his entire programme and the prize of the jury for the obligatory composition. In 2013 again he obtained the prize for the composition of his programme (organ and saxophone).
In September 2010 he and the violaplayer Dominica Eyckmans created a work that Solange Labbé, a Belgian composer, has written for them. He is very much in demand with different choirs in Flanders, and also soloists frequently ask him for accompaniment.
Between 2008 and 2012 he accompanied the vocal group G.O.V. in Goes (NL) in the rehearsals for their different productions, mostly musicals.