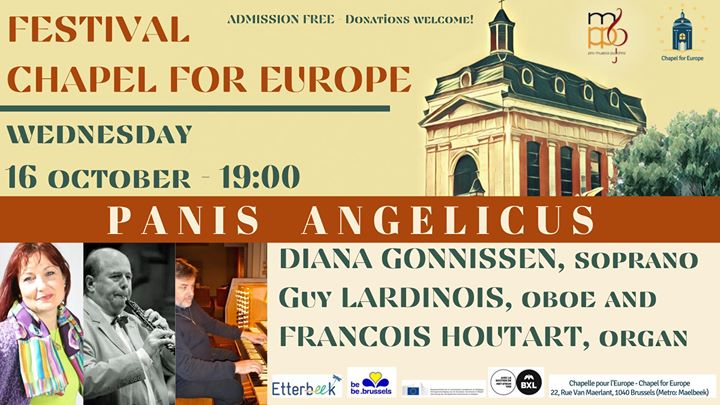 Abraham van den Kerckhoven was a Flemish organist and composer. He was active in Brussels, working as organist of Church of Saint Catherine and as court organist, and was held in high regard by his contemporaries. A single collection of his workssurvives to this day, containing numerous short versets and several lengthy works for organ, showcasing Kerckhoven’s high contrapuntal skill, and the influence of several important composers, particularly Peeter Cornet.

Diana Gonnissen is a lyric soprano and actress, graduated with distinction from the Royal Conservatory of Brussels. She happily masters a varied repertoire ranging from classical music to operetta or even chanson. His career is atypical: Opera, Café Theater, performer, show promoter, events…
Her actress training brought her to work in street theater and improvisation with the Magic Land Theater. Intrepid soprano, she sings opera accompanied by Philippe Hacardiaux, a talented accordionist.
A bold formula that makes the accordion noble and accessible to all so-called “serious” music. In the same vein, she also created “Les Divas” with Eva Nyakas and Nathalie Borgomano.
“Tonight, honey! “: Musical theater co-written with Sophie de Tillesse. Lyrico-wacky show for the happiness of all…
She was invited to perform at the Palais Royal in May 2013 to enhance the Princess Mathilde Fund
Under the direction of Zofia Wislocka and her string orchestra, I Musici Brucellensis, she has created in Belgium the “Juliet’s letters “, composed by Elvis Costello, and the opera “The Marriage of Antonio” by Lucille Grétry.
An eternal researcher, Diana Gonnissen is also a graduate of Louvain-la-Neuve’s Center for Theater Studies.
Passionate about vocal work research, she teaches singing in academy.
Her concerts always have a humanist dedication.

After studying music at the Royal Conservatory of Music in Mons, Guy Lardinois began a career as an orchestral, concert and chamber musician. Subsequently, he devoted himself to the study of old oboes (baroque and classical) with Marcel Ponssele. He takes part in a master class and obtains a master’s degree for the interpretation of the classical and romantic works on historical instruments. This class was organized by the higher center of dance and music of Poitiers in collaboration with the Orchester des Champs Elysée and this, under the artistic direction of Philippe Herreweghe. He performs in Baroque concerts on period instruments in Bretagne, in Paris with the “Neveux de Rameau” Productions, at the Academies of Saintes with the Atlantic Orchestra under the direction of Philippe Herreweghe, Fabio Biondi, Christophe Coin and Guy Van Waas, with the Laudantes Consort under the direction of Guy Janssens and Laetare Musica. With the support of “Le Borelais” and under the patronage of José Van Dam, Guy Lardinois founded the Baroque ensemble “Le Florilège Musical” (Recitals with organ for the organ festival the “Collegiades” of Ste Waudru in Mons in July 2003 and on November 27, 2004, in Paris at the church of Batignolles). He is also honorary assistant director of the Quaregnon Academy of Music.