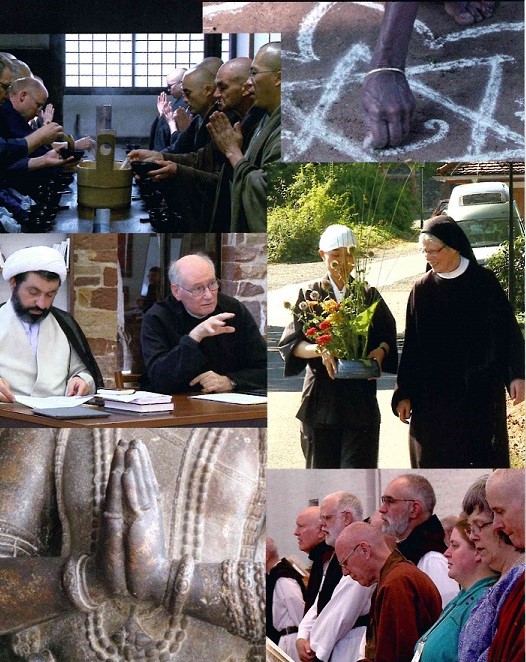 Email: welcome@chapelforeurope.eu
“Strangers No More” a documentary from Monastic Interreligious Dialogue (MID-DIM)
In the framework of the World Interfaith Harmony Week,  February 1 – 7, 2022, the Chapel for Europe together with inTouch Brussels invites you to open up, learn and reflect on interreligious dialogue.
Our documentary film for this month “Strangers No More” (La voie de l’hospitalité) relates with stunning imagery the relationships Catholic monastics have spent decades fostering with spiritual practitioners around the world. The understanding and friendships that result transcend the apparent boundaries between religions.

The documentary was filmed in France, Italy, Germany, Morocco, Japan and the United States and shows the exchanges between monks and nuns as they join Buddhist and Hindu monastics and Muslim spiritual practitioners to share daily rituals, sit in silent meditation or prayer with one another, talk about their traditions and practices to form understanding and friendships.
Moderator: Père Benoît Standaert OSB, elected member of the Monastic Interreligious Dialogue (DIMMID) and has participated in one of the trips to Japan organised by the Commission for Monastic Interreligious Dialogue.

The film has dialogues in French and English, subtitles only in French.

It is required to register following this link, in order to receive the connection link to zoom the day of the Movie Night: https://docs.google.com/…/1XV2bzzTonDTo1ibuEVXEC4I…/edit
The United Nations on the observance of the World Interfaith Harmony Week.
For more information:
https://worldinterfaithharmonyweek.com/
https://www.intouchbrussels.com/
Monastic Interreligious Dialogue (MID-DIM)