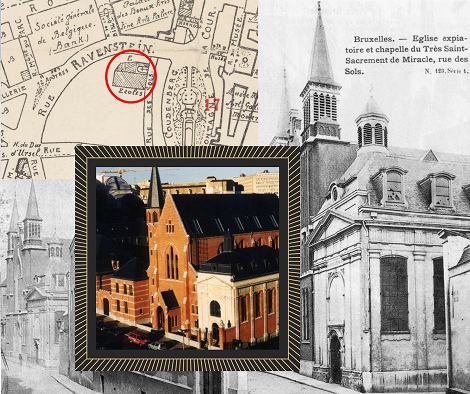 Back to Mission & Team

The history of the Chapel goes back to the “Chapelle du Saint-Sacrement de Miracle”, built in 1455 in the Rue de Sols (Stuiversstraat) in the centre of Bruxelles. In the course of urban development in the 20th century it had to make way for the construction of the Central Station. The original Chapel (together with the adjoining convent belonging to the religious order of the Dames de l’Adoration Perpetuelle) was reconstructed at its present location in the Rue Van Maerlant and in 1908 it opened for worship.

In 1974, the elderly nuns decided to sell the whole group of buildings (today the main building accommodates the European Commission’s library and visitors’ centre .Thanks to the initiative of many people coming together – European civil servants and others involved in founding the European Union, religious and lay people, different Christian churches and civil institutions – the Chapel was saved from demolition in order to maintain it as a space of prayer and celebration.

In 1999, the Chapel was purchased by the non-profit international association Aisbl Chapelle pour l’Europe. The purchase of the Chapel, its restoration and conversion, which cost 1.6 million €, were financed by donations from many private individuals, the Jesuit Order, the European Catholic Foyer, the La Viale-Opstal Community, the Bishops’ Conferences of the European Community (COMECE), several Protestant Churches, the Conference of European Churches (CEC), the King Baudouin Foundation, the National Belgian Lottery and companies such as Suez, Ciments d’Obourg, to name but a few.

On 25 September 2001, an ecumenical service was held to mark the official inauguration of the Chapel in its mission to serve European Christians. On 28 September 2016, the Chapel for Europe celebrated its 15th Anniversary. The ecumenical celebrations of thanksgiving were led by H.E. Cardinal Jozef De Kesel (Archdiocese of Mechelen-Brussels), H.E. Metropolitan Athenagoras of Belgium (Ecumenical Patriarchate of Constantinople), Rev Pasteure Laurence Flachon (Église Protestante Unie de Belgique), Rev Canon Jack McDonald (Central Committee of the Anglican Church in Belgium).